Jetro Willems is not to speak about the setting of PSV in the early stages Sunday in the 2-1 lost the top match against Feyenoord.

“If you start then you can expect that you lose. The first ten minutes I thought: what is happening here?”, according to Wilson, who quickly against a 1-0 deficit to looked with PSV. Jens Toornstra was in the ninth minute spot-on in The Cockpit.

“The attack of the Team focused on our right side,” continues Willems. “But I am not going to mention their names. As a team We failed.”

Yet, everything the 22-year-old full of PSV on the way in which some of the players of the Local club played.

“I’ve definitely annoyed. Races like these, you may not have a relaxed start. You need to have the focus and feel the tension.”

“It must be all or nothing, but I saw that not everyone back. Therefore we gave in the initial phase three chances away. It had a very quick 3-0 and then it was ready.”

Willems of PSV is recovered in the course of the competition. He also thinks that PSV had a point earned at the Rotterdam front-runner.

“At the end of the first half and in the second half showed we finally have the courage and we created chances. I had the idea that we were better. At one point I saw even that Feyenoord powerless. They didn’t know more, shots the balls just go forward.”

“I think that we ourselves therefore have low done with this defeat. We have the chances, but Feyenoord made it in the end though.”

By the defeat is the lead of the Rotterdam leader on number three PSV increased to eleven points. Number two Ajax had six points more than the Locals and so thinks Willems the second place, the maximum amount for PSV.

“We need to be realistic and hold on to the fact that we are still in second place. We get Ajax at home and we should beat them. Then we help the Team a hand and we can probably still on the increase.” 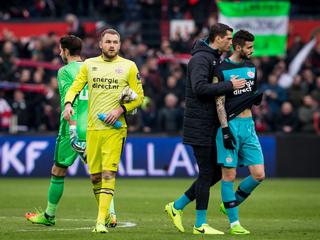