Van Persie fit in time for a duel with Feyenoord

Van Persie fit in time for a duel with Feyenoord

Robin van Persie is ready to Thursday with Fenerbahçe in action against Feyenoord in the Europa League.

Fenerbahçe coach Dick Advocaat did Wednesday during the press conference for the game is still somewhat mysterious about Van Persie. “We will see if he can go play, that will be you tomorrow.”

But everything points to robin Van Persie for the clash of the Turkish football club will sit. The last three workouts could the 33-year-old striker to fully participate.

Plagued by small injuries could robin Van Persie this season, as yet, little action. Of the ten matches Fenerbahçe played, he did six, in which he a total of 212 minutes.

The expectation in Turkey is that robin Van Persie on the bench, will start against the club that he between 2001 and 2004 in 61 matches played fourteen goals made.

With the Rotterdam-based club won the fa cup and the UEFA Cup in 2002. In the 3-2 final win against Borussia Dortmund had the birth of Dutchman a move, but he was after an hour of play changed. 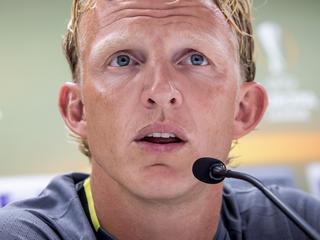 See also:
Kuijt has confidence in a good result against Fenerbahçe

It is the first time that robin Van Persie against his old club plays. In the European context, he came already ten times against other Dutch clubs. Four times it produced a victory for his team and six times the match ended in a draw.

Three times played fa cup against PSV and Ajax, and two times were AZ and FC Twente the opponent. Not a single time was the lefty to score in those duels. Last year, the fa cup with Fenerbahçe in the Europa League twice against Ajax (1-0 and 0-0).

The match between Fenerbahçe and Feyenoord in the Sukru Saracoglustadion begins Thursday night at 21.05 hours.

View the program and the positions in the Europa League