Totti (40) confirms that, after 24 years afzwaait at AS Roma

Totti (40) confirms that, after 24 years afzwaait at AS Roma

Francesco Totti plays Sunday, his last game played for AS Roma, so he has Thursday confirmed. With the home game on Sunday against Genoa comes after more than 24 years an end to the career of the attacker at the Italian club.

There was the last couple of weeks in Italy plenty of speculation about a departure from Totti, but the 40-year-old clubicoon held on the plain. Now he creates clarity with a statement on Twitter.

“Roma-Genoa, Sunday 28 may 2017, is the last day on which I the shirt of Roma wear. I can’t tell you how much the colours of the club for me have meant and always will continue to do so”, writes Totti.

“My love for football will never go away. It is my passion. I can’t imagine that I ever me somewhere else to keep working.”

Totti is in the message mysterious about his near future. Roma director Monchi had recently know that the clubicoon goes to work as a board member, but Totti will report themselves to nothing about. “Starting Monday, I’m ready to turn to go. I’m ready for a new challenge”, is the only thing that he want to say. 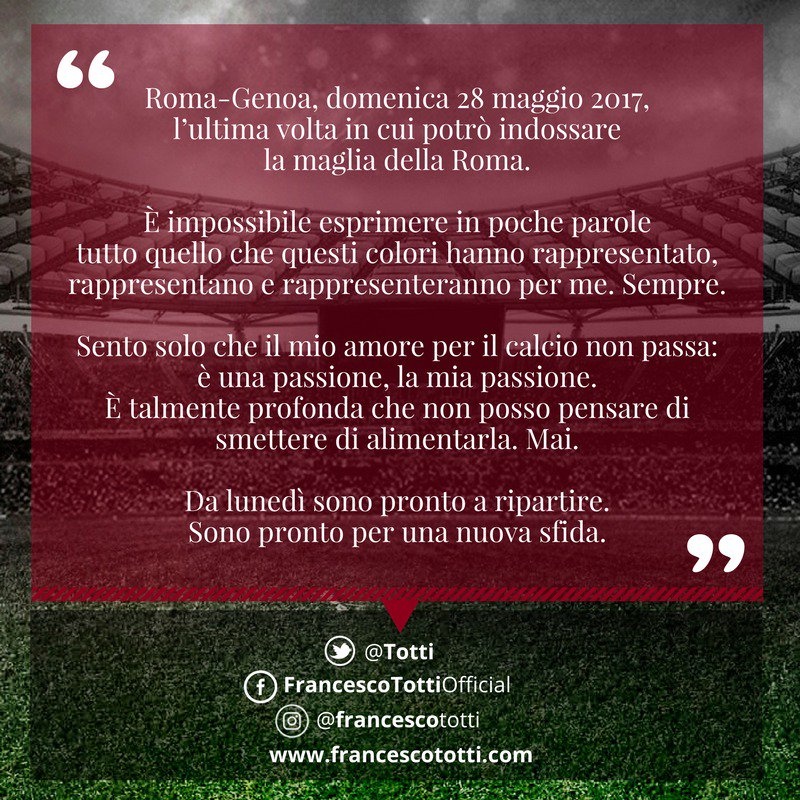 Totti played since his debut in 1993 his entire career at AS Roma and was in 2001 the club won the national championship. Eight times and ended the playmaker on the second place in the Italian league.

AS Roma won the Coppa Italia in the era-Totti twice and lost the final battle six times.

Totti collected 58 caps for Italy and finished his interlandcarrière already after the Italy won the world cup in 2006. That tournament had Totti in all seven duels a move.

This season started Totti only once in the base, sixteen times he came as a substitute in the field. The old hand was good for two goals.