5 min read
Tattoos have been in existence since a very long time now. Prior to the late Twentieth Century, to go through a tattoo removal procedure any person had to withstand a procedure that was very painful and only partially effective. Since tattoos became the fashion in the 90’s, more time, effort as well as money was devoted in order to finding new procedures and improving the methods which were previously available.

Throughout the past tattoo removal has been carried out in different ways by making use of various procedures. Tattoo laser removal is amongst the most popular methods for getting rid of unwanted tattoos. However, laser tattoo removal isn’t the only option available today. Presently there are various other procedures for getting rid of tattoos. Listed below are some other options that you may want to consider.

How Are Tattoos Removed?

Laser tattoo removal is easily the most successful and common method for tattoo removal. This procedure makes use of dense beams of light in order to break up the tattoo ink to particles that are consequently absorbed by the body, efficiently removing the tattoo. Today’s laser light treatments are very effective at removing tattoos without causing a lot of damage and / or scarring to the skin impacted by the tattoo. Having said that, one needs several tattoo removal sessions, in order to completely get rid of a tattoo. The session could cost hundreds of dollars therefore laser tattoo removal could be expensive, although laser treatments are effective at removing tattoos without causing lots of damage and / or scarring to the skin which is impacted by the tattoo. More the treatments needed to remove the tattoo, more likely is the skin damage. These treatments could be painful as well as lead to blisters and scabs that might result in permanent scarring.

The three lasers developed especially for tattoo removal are the Q-switched Alexandrite, Q-switched Ruby, and the Q-switched Nd: YAG, which is the most recent system in lasers and is extremely advanced for the eradication of blue, red, and black color inks. 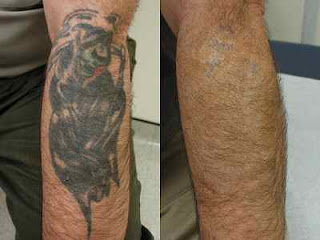 equired to take off the tattoo.

Tattoo removal could also be accomplished by means of several skin removal procedures. Dermabrasion takes off the tattoo by way of sanding off the upper and middle layers of the skin. Excision tattoo removal is carried out by an aesthetic surgeon who makes use of a scalpel in order to take off the tattooed skin and after that stitch up the area. Should the tattoo be significantly large, a skin graft might be required to patch the area.

Cryosurgery is another procedure for tattoo removal, which involves freezing the tattooed skin, which is subsequently taken off by way of surgery.

The least effective procedure of tattoo removal available in the market is by way of creams as well as fading solutions. Companies that manufacture such products lay claim that their creams and / or solutions are able to lighten a tattoo by simply being applied onto the tattooed skin over a period of time. These companies claim to be able to do this at a fraction of the cost of the procedures mentioned previously and with significantly less pain. However, this method has still to be proven very effective and is also inferior in comparison to various other tattoo removal methods.

How Many Sessions does a Tattoo Removal Procedure require?

This actually depends on a particular individual as well as the type of tattoo. Certain tattoos are a lot more challenging to get rid of and require many more sessions in order to get rid of them. Normally, tattoo removal requires around 2 – 15 fifteen sessions. An average sized tattoo that’s about 4 square inches will take around 7 – 9 sessions in order to achieve optimum resolution. It takes more than one treatment that lasts only a couple of minutes to take off an entire tattoo. The number of treatment sessions is determined by the quantity as well as type of ink utilized in addition to how deep it has been injected. It needs 3-week intervals in between treatment sessions in order to allow the pigment remains to get soaked up by the body.

Acne, commonly referred to as pimples, is an annoying and frustrating experience. Almost everyone goes through this experience during puberty, except for a few lucky ones that have dry skin. Acne occurs when the sebaceous glands attached to the hair...

Pain comes in different forms and is common to mankind. It is sometimes moderate and bearable and sometimes chronic and excruciating. Muscle and joint pain are agonizing conditions that are commonly experienced by most people across the world...

Excess body or facial hair is a problem that many individuals have to deal with. Getting rid of extra hair from the face, back, underarms, legs and hands, is turning out to be quite a serious cosmetic issue. Although hair removal is...

Gone are the days of waxing and shaving for hair removal!

If you are one of those people who just love to dress on impulse, you must really hate the chore of hair removal. Whether it is waxing or plucking, depilating or shaving, no atter which hair removal method you prefer, the method is sure to take time...

Troubled with skin wrinkles? Don’t worry!! We have a solution..

You know that it happens to everybody and it is going to happen to you as well. Unfortunately, everyone ages and everyone gets wrinkles! Even if you are mentally prepared for them and have decided to accept the wrinkles gracefully as a sign of...

Getting a tattoo done is an extremely exciting thing for a lot of people. However, getting the tattoo removed can be quite a difficult task. So what are the procedures that are meant for tattoo removal? What does tattoo removal involve? Is tattoo...

While a surgical process to get the lost hair back can do wonders to the looks of a person. Surgical procedures are known to have side effects and may harm the body. Hair loss may occur as a natural process in many individuals. However, hair growth...

Patients suffering from hair fall can get the right information about how to put a stop to hair fall, on this website. Over the ages, hair fall has been regarded with a negative perspective and has been associated with loss of beauty and aging...

Cosmetic imperfections that comprise of wrinkles, brown spots, scars, etc. can begin to show on the skin at any stage in life. There are plenty of treatments available today to improve and eradicate these unwanted imperfections. However, the one...