Ranomi Kromowidjojo who is engaged to Ferry Weertman

Swimmer Ranomi Kromowidjojo is going to get married to fellow swimmers Ferry Weertman. That is reported by the triple olympic champion on Sunday on Instagram.

“All the way up in the clouds, and there, on the top of the mountain,” writes Kromowidjojo to take a photo in which she and Weertman with a ring on her finger and shows it.

“Have a nice holiday! Oh, and she said, ” yes,” is bringing her new fiance is, itself, reigning olympic champion in the 10 km open water, at the news of the engagement to get outside on his own Instagram page.

The 29-year-old Kromowidjojo and the 27-year-old Weertman for 2015 together. This would be the swimmer in a relationship with a former swimmer Pieter van den Hoogenband.

In 2008, Kromowidjojo with the Netherlands ‘ athletes, olympic gold medal in the 4×100 freestyle. In 2012, she added as individual olympic titles in the 50-meter and 100-meter freestyle to it. 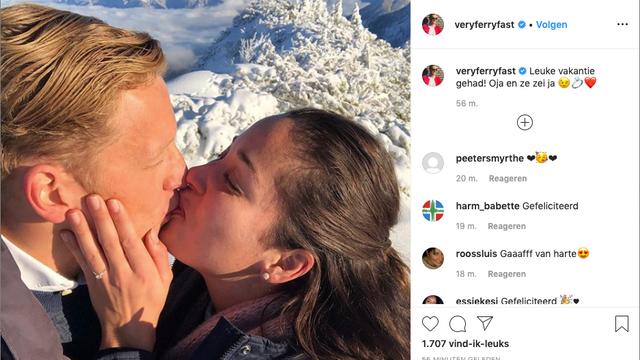