Coach Peter Bosz has gain David Neres included in the clash of the Ajax for the Europa League return against Legia Warsaw on Thursday in the Arena.

For the Brazilian attacker is the first time that he is to the elite Leaf belongs to. Neres (19), who, this winter for twelve million happened of Sao Paulo, was last week presented.

Daley Sinkgraven is missing in the 18-man selection. The full struggling with an ankle injury that made him last Sunday at the hand held in the competitieduel with Vitesse in Arnhem (0-1). He was in the basis is replaced by Jairo Riedewald.

Justin Kluivert, who this calendar year are already a number of times a move was vleugelaanvaller, anyway not to the kick-off appear against Legia.

The 17-year-old attacker is playing Tuesday with Ajax under-19 in the Youth League match with Dinamo Kiev (3-0 win). For that reason, also missing Matthijs de ligt in the selection, while Kenny Tete has been suspended.

The match between Ajax and Legia begins Thursday at 19.00, and is under the leadership of the English arbitrator Anthony Taylor. The first match in the sixteenth finals ended last week in Warsaw at 0-0.

Ajax trains for the return against Legia

Bosz said Wednesday at the press conference that he has confidence in a good outcome against Legia Warsaw. The coach has with his team trained on penalty kicks. “We’re going to make sure that we stay the course for that time have been completed.”

Bosz looked even back to the incident last Sunday in the away game against Vitesse. Spectators of the home team made apengeluiden against Ajax goalkeeper Andre Onana.

“It is a shame that in the Netherlands it still happens. I have it in my period at Vitesse have never experienced,” said Bosz according to the NOS. The coach told that he is called by general director Joost de Wit of Vitesse.

“He has me after the incident apologized. I’m still not Onana spoken about, but this is not good to talk. It was just a small group. But whether it’s two or twenty, that is still too much.” 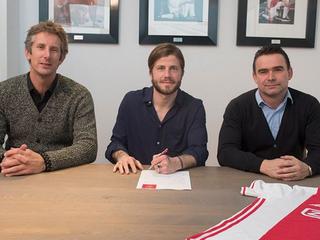