Fox-News-Flash-top-headlines for Jan. 18 here are. Check out what you click on Foxnews.com

The National Archives on Saturday apologized for blur-out-signs in a photo of the 2017 Women’s March in Washington, DC, presented in the museum — say, it would check the guidelines and replace the image.

“We have made a mistake,” it said in a statement.

THE NATIONAL ARCHIVES OF THE BLURRED ANTI-TRUMP OF THE CHARACTERS IN THE PICTURE OF 2017 WOMEN IN MARCH: REPORT

The photo in question celebrates on the display as part of an exhibition on the centennial of women’s suffrage — the 2017 March down Pennsylvania Avenue, the day after President trump was elected. The picture, taken by Getty Images photographer Mario Tama, shows the road Packed with protesters, many anti-Trump characters.

But The Washington Post reported, first, that many of these posters had washed out. Posters with the inscription “God Hates trump had” blurred “Trump”. Other characters were changed to women, the anatomy, according to The Post. One that said: “If my able vagina shoot bullets, it would be less REGULATED” had, “vagina” out blurry, while the one that says: “This P—y Uses” had blurred out the profanity.

In his statement, the National Archives, said that it was an archival record, but a license to use as a promotional graphic: “Nevertheless, we were wrong to change the picture.” 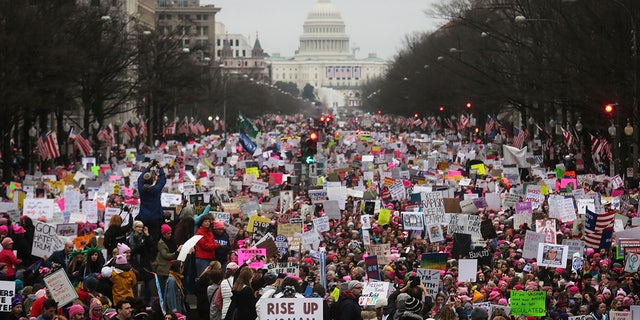 WASHINGTON, DC – JANUARY 21: protesters run during the Women’s March on Washington, with the Capitol in the background, on 21. January 2017 in Washington, DC. Large crowds attending the anti-Trump rally came a day after US President Donald Trump was sworn in as the 45 President. (Photo by Mario Tama/Getty Images)

“We have removed the current display and replace it as soon as possible with an unmodified image,” the statement said. “We apologize and will promptly conduct a thorough review of our exhibition policies and procedures, so that this happens again.”

In an earlier statement to The Post, it had said archivist David Ferriero — appointed by former President Barack Obama in 2009 supported the decision.

“As a non-partisan, non-political Federal office, we said fuzzy references to the president’s name on some posters, not to engage you in current political controversies,” archives spokeswoman Miriam Kleiman of The Post.

But the decision quickly came under heavy criticism.

Rice University historian Douglas Brinkey said in The Post, there was no reason to change, a historic photo.”

“There is no reason for the National Archives, the ever change Digital, a historical photo” Brinkley said. “If you don’t want to a certain image, then you are not using it. But to confuse the public is reprehensible.”

The apology came as women were new marches, to be held in Washington, DC, New York and in other cities across the country.