A new image released by NASA shows a beautiful display of fireworks in a galaxy about 23 million light-years away.

It is, however, not of paper, dust and a real fire to create this beautiful image, but it is a big, black hole, shock waves, and large amounts of gas, according to NASA.

The galaxy shown, NGC 4258, it is well-known for having two extra spiral arms that glow in X-ray, optical, and radio light. 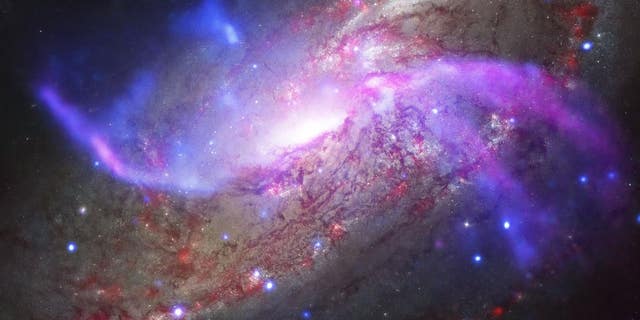 As NASA notes, a new study using the Spitzer telescope show that shock waves, similar to sonic booms from supersonic planes, are heating large amounts of gas — equivalent to about 10 million suns.

Scientists believe that the black hole at the galaxy’s centre, with the creation of powerful beams of high-energy particles.

These jets, in turn, the disruption of the galaxy’s disk, and the generation of shock waves.

Finally, the shock waves heat the gas to thousands of degrees.