As a white, former University of Maryland student was found guilty of murder Wednesday for the stabbing of a black student to death at a bus stop on the campus of the university in 2017.

Sean Urbanski, 24, faces a maximum sentence of life in prison without the possibility of parole for the fatal stabbing of Richard Collins, III, 23, in May of 2017. He is scheduled to be sentenced on April 16 by the year 2020.

The prosecutor argued the crime was racially motivated, but on Tuesday, Circuit Court Judge, Lawrence Hill, Jr. agreed to throw out a hate crime against a payment to Urbanski for the members of the jury began deliberations.

OREGON-BANK OF STABBING KILLS AT LEAST 1; A SUSPECT IS CAUGHT

District attorney, Jason Abbott, said the toxic blend of alcohol and racist propaganda, and encouraged Urbanski, to establish phil Collins on the basis of his hatred for black people. Urbanski was one of “Alt Energy: the Nation” group on Facebook, a group in which members post derogatory comments about African-Americans, and others. He also had at least two racist memes saved on his cell phone. 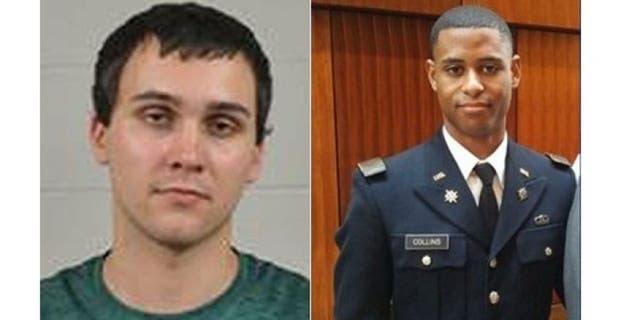 Sean Urbanski, 22, of the left-hand side, is accused of stabbing Richard Collins, III., 23, at the University of Maryland campus in College Park early on the following Saturday, 20th May 2017.
The university of Maryland, the Police and the Collins family

Collins was appointed a lieutenant in the U.S. Army, and prior to his death, he was preparing to deploy to the demilitarized zone between North Korea and South Korea. He was days away from graduating from Bowie State University, a historically black college, was celebrating with friends at the bars around the University of Maryland, College Park Campus when he was attacked.

Urbanski was drinking with friends, that fatal night. The lawyer, William Brennan, said, an expert defense witness concluded that Urbanski’s blood-alcohol level was three times the legal driving limit at the time of the murder, allowing him to get too drunk to premeditate the killing of first-degree murder conviction.

Around 3 o’clock on a Saturday night, and Urbanski is approached Collins while he was waiting for an Uber with a friend of his, a white man and an Asian woman met them at the bus stop. Urbanski looked at them for more than 10 minutes before he left, and came back with a folding knife, and then the friends of a wooded area, according to Abbott.

“Oh, no,” Collins said Urbanski stabbed him once in the chest.

Abbott said Collins had his hands in his pockets, as Urbanski and fell on him.

After the video, Mimi, Urbanski, folded the knife, stuck it in his pocket, and sat down on a park bench until the police arrived, according to Abbott. The police arrested him at the bus stop, 50 metres away from where Collins was dying.