The College Tour-episode with the deceased Israeli ex-president Shimon Peres is Wednesday night repeated. The EO-documentary A Haunting History will be on a different date to be broadcast.

That makes broadcaster NTR Thursday known. Twan Huys interviewed in October 2013, the former prime minister of Israel. The Hall served as the location. The repetition is at 22.55 hours on NPO2.

Peres came last weonsdag at the age of 93, to death. It was already longer not well with the health of the former president. In January, he was admitted to hospital because of heart problems. The former politician was awarded in september a pacemaker, because he seemed to be battling with a heart rhythm abnormality.

Life Shimon Peres in the picture

Peres with the then Egyptian president Hosni Mubarak in 2010, during a meeting about the peace process in the Middle East.
© AFP

Peres and Arafat in 1994 with the new Norwegian Foreign minister Bjoern Tore Godal in Oslo.
© AFP

Bill Clinton and Peres in 1995, at a joint press conference.
© AFP

Peres at the funeral of Rabin in 1995. He followed him as prime minister.
© AFP

With the Israeli premier Netanyahu, during the annual commemoration of David Ben Gurion in 2009.
© AFP

Pope Francis, Netanyahu and Peres during a visit to the Yad Vashem Holocaust museum in Jerusalem in 2014.
© AFP

Netanyahu and Peres at a ceremony of the American independence day in Herzilya in 2010.
© AFP

Shimon Peres, during one of his last public appearances with the current president Reuven Rivlin (right) and Prime minister Netanyahu (left).
© AFP

On 13 september he was rushed to the hospital due to a stroke with severe bleeding. In addition, he would brain damage have suffered. Since then, he stayed in the hospital in the city of Ramat Gan near Tel Aviv. The last week has worsened the situation quickly. 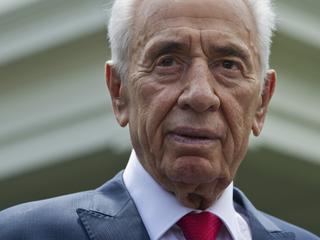