PSV coach Phillip Cocu was annoyed Saturday after the 3-1 victory at NEC Nijmegen of the restless play of his team.

“We played today much too sloppy. In the first half of the members we have so many losts. Almost all the balls jumps of the foot and is very impure. That gave me a restless spelbeeld”, said Cocu.

“We should be happy that we have today with 3-1 win, not a very good football show,” said the coach at the press conference afterwards.

PSV recorded by hits of Marco van Ginkel, Bart Ramselaar and Luuk de Jong against NEC the sixth victory in a row in the Premier league. Next week Sunday for the Locals the top match against the leader Team on the program.

“We know that next Sunday might be a defining match in the title. If we win, there is still everything possible”, said Cocu.

“On the other hand, we’re going to try to get us to shake off. It is a great game. There is a lot of tension.” 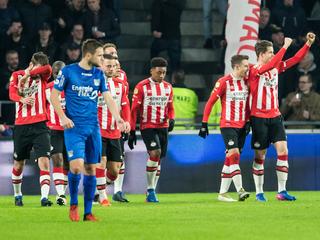 See also:
PSV remains a difficult victory at the NEC in rail Feyenoord and Ajax

Van Ginkel loved thanks to his hit from a penalty kick, a good feeling about the duel with NEC. He has confidence in the duel with Feyenoord.

“We can now finally about the match against Feyenoord. We are going there anyway with a nice feel to it now,” said the midfielder, who so far in all four thuisduels of PSV after the winter break, scored.

PSV had it difficult with the opponent from Nijmegen.
© ANP

Florian Jozefzoon and Luciano Narsingh left in the winter break, with PSV, and said goodbye.
© ANP

Bart Ramselaar signed for the 2-1.
© ANP

Van Ginkel opened against NEC in the twentieth minute, the score from the penalty spot. PSV missed seven of the last fourteen penalties.

“A lot of guys have already been and they were not always in. The last time took Gaston Pereiro m. He did not now, so I thought I would take the penalty kick. I had to trust that I touch would shoot,” said Van Ginkel against FOX Sports.