The players of AZ, the supporters meeting that Thursday evening were present at the uitduel with Olympique Lyon in the Europa League. The Alkmaarders lost by no less than 7-1, the heaviest European loss ever.

To compensate for the defeat in Lyon do the players of AZ the 660 fans a card gift for a uitduel of your choice. The supporters can choose from matches against Feyenoord, Ajax, Heracles Almelo and NEC.

“We have set ourselves and everyone that AZ is connected with this contest, a bad service. We also realize that we the supporters have abandoned” declare captain Ron Vlaar on the site of AZ.

“It was nice to see that so many traveled to Lyon to support us. That we value enormously and therefore it is very disappointing as the game on this manner.”

Lyon was at rest already with 4-1 for hits of Nabil Fekir (2), Maxwell Cornet and Sergi Darder. Levi Garcia made the goal for AZ. In the second half scored again Fekir, Houssem Aouar and Mouctar Diakhaby for the French.

Coach Van den Brom left after the duel very critical of his team. He found that his players except the supporters also to each other in the lurch left in the Parc Olympique Lyonnais.

In the Eredivisie AZ the current number five. Sunday we play the Alkmaarders at 14.30 hours, at home against PEC Zwolle, that thirteenth. 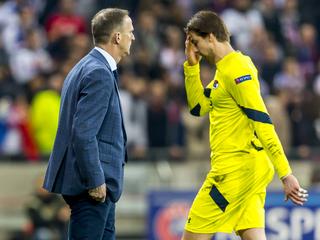 See also:
Van den Brom will find that players AZ together were choking